Our good friend Kevin Collette of Our Man From Bond Street has joined the ranks of Bond author with the release of his book, James Bond Le Dossier Secret. Here's a translation of the French blurb from Kevin. 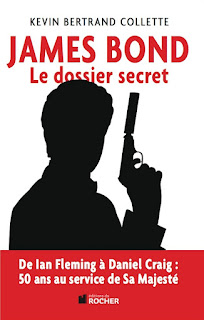 Did you know that...

One of the very first early screen treatment of Casino Royale had James Bond replaced by a … Girl as the main character of the plot?

George Lucas & Steven Spielberg created the adventures of Indiana Jones after being rejected by Albert Broccoli as potential directors of a James Bond movie?

Author Ian Fleming intended originally to have James Bond dying at the end of From Russia With Love.

All this and more.

Much more is revealed in Kevin Collette 's very first essay on the James Bond phenomenon, which took the world by surprise at the movies way back in 1962 – the very year our writer was born.

With an exclusive foreword penned by the delightful Miss Rachel Grant – aka Peaceful Fountain of Desire in Die Another Day) the book packs 200 pages of information even the most die-hard fans of 007 will find entertaining – including exclusive ITWs with Raymond Benson, Sam Rolfe, Jeffery Deaver and others famous Bond people and distinguished 007 connoiseurs from all over the world .

A movie critic for more than thirty years, Kevin Collette has been truly mesmerized by the first James Bond movie he saw as a kid in a theater in 1971. The film was Diamonds Are Forever, and the kid never recovered since…


James Bond Le Dossier Secret will be released in France this month. Watch Our Man From Bond Street for details.