Amazon to give IAN FLEMING paperbacks "a new look" 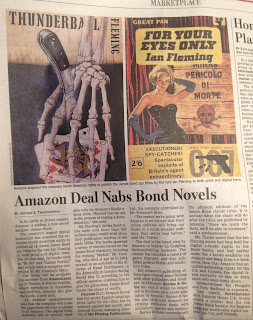 The Wall Street Journal has an article today about Amazon's deal to publish the classic Ian Fleming James Bond titles which provides a few fresh details about what we can expect.

The article confirms that Amazon will publish the books as both print editions and eBooks. The print versions will be paperbacks published under Amazon's Thomas & Mercer imprint (which specializes in mysteries and thrillers). The WSJ article states that "Amazon will give the books a new look."

While the eBooks will initially only be available via Amazon's Kindle store, the new paperback editions will be available to all retailers.

However, Barnes & Noble have said in the past that they will not sell books printed by Amazon in their stores. The retailer has criticized Amazon for striking exclusive deals with publishers, agents, and authors. Whether or not they will hold this hard line on 007 remains to be seen.

"Once we learn the facts, we'll be able to comment," said a Barnes & Noble spokeswoman.
Posted by John Cox at 9:01 AM