Having posted the John Gardner U.S. hardcovers last month, I figured I'd continue with the John Gardner UK hardcover first editions from Jonathan Cape and Hodder & Stoughton. Certainly not as uniform as the U.S. set, but some nice covers. 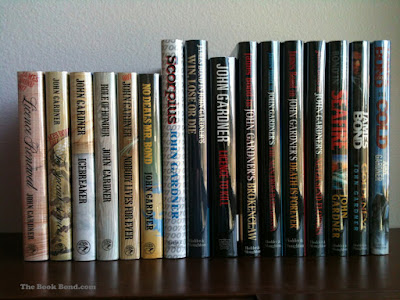 Licence To Kill, GoldenEye, SeaFire, and COLD are the standout rarities in this batch. Licence To Kill was actually printed in the U.S. by Mysterious Press and distributed in the UK by Severn House in very limited quantities in April 1990, a year after the paperback release. The First Edition print run of GoldenEye is said to have been in the 2000 copy range. It went into subsequent printings very quickly. SeaFire was remaindered in the UK so almost all copies were price clipped and it's tricky to find a copy with the price intact.

Because SeaFire was not a big seller, COLD was printed on a demand basis. The bulk of the orders came from public libraries and these editions were bound in with plain boards of a different color. Only about 900 copies were printed and about 500 of these were library editions. Unless you pre-ordered this book, you were unlikely to get one. It's the rarest of all the Gardner hardcovers.