The SILVER BEAST has been saved! 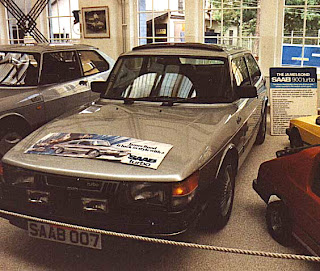 According to our friends at From Sweden With Love, the promotional Saab 900 Turbo from the John Gardner era, "The Silver Beast", will remain in Trollhättan, Sweden as part of the intact Saab Museum collection. As we reported last week, the entire collection had been put up for auction as part of Saab's recent bankruptcy. But according to a post on the From Sweden With Love Facebook page...

"We have just received the good news that all cars in the SAAB museum (incl. "Silver Beast", the SAAB 900 Turbo as driven by James Bond in John Gardners first three novels) will remain in Trollhättan, Sweden. 500 offers from all over the world came in but thanks to the local community, Saab AB (the defense and security company) and the Wallenberg family (who used to own the car factory), the museum will be intact. The entities mentioned paid 28 Million SEK for the entire lot and rescued a piece of Swedish industrial history from being departed all over the world."


Great news for Bond fans, Saab fans, and the city of Trollhättan!