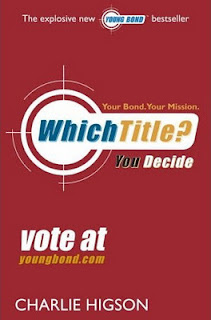 Charlie Higson's third Young Bond novel would be somewhat of an experiment. First off, the book would be confined in time and space, taking place entirely in London over the course of a few days in December. It would also play host to a bold promotional idea that would excite fans, challenge the publishers, and bring some criticism from the press.

Higson explained his approach to his third book in a Q&A with fans on the official Young Bond website. "I wanted to send James to a big city, as the first two books had mostly taken place in the countryside. I chose London because I live in London, I know it well and I love it. There are some fascinating unknown corners, and I wanted to do a sort of Da Vinci Code about the city, in which James has to follow a series of cryptic clues to find out what’s going on and save the day."

Technology would also play a major role in the book, as Higson continued, "I wanted to write about computers and code-breaking, so this is at the heart of the book. Proper computers weren't built until the Second World War, but people were thinking about them in the thirties. I also wanted to bring back a character from an earlier book [Red Kelly]. It’s as different to Blood Fever as that book was to SilverFin."

Higson's working title was Shoot The Moon. "That idea of shooting the moon, of risking everything in order to win everything, seemed to me to sum up James Bond's character," he explained in 2006. "He’s willing to take risks like that and go out on a limb. I thought the title Shoot the Moon was very appropriate, but it was felt that it sounds a little bit wet. There’s something about the 'moon' sound that's a bit soppy, so that was rejected. That means that we’re now stuck in the position where we don’t know what the book will be called."

Six Days in December (referencing the compressed time frame), and The Big Smoke (slang for London), were also rejected. It was then that Puffin came on the idea to open up the title selection to fans.

The idea was proposed by marketing officer, Justin Renard, who explains, "As I was developing plans to promote the yet untitled book, there was a lot of correspondence discussing what to name it. It occurred to me that since fans of Young Bond consider him just as much a British Icon as they do James Bond, that it would be an original ploy to give them the chance to decide instead of us. I think my exact words are why should it just be to us who decide. Bond belongs to everyone. And once I pitched that initial idea, more great ideas started rolling in and the rest just sort of fell into place."

The competition was announced on the official Young Bond website on October 3, 2006. Fans could vote online for one of three possible titles: Double or Die, N.E.M.I.S.I.S. or The Deadlock Cipher. To help them decide, the site included an extract from the book and a note from Charlie Higson about the three titles. The winning title and cover art would be kept secret until the day of publication. Even the proof edition was jacketed only as "Young Bond 3" (which now makes for a nice collectible). The challenge was keeping the winning title a secret.

"Well as a matter of fact, the entire campaign timing was a challenge," says Renard. "The book was scheduled for publication just after the winter holidays and normally in book publishing all the advanced information for books—their title, jacket, spec, etc—are not only released to the public months in advance of publication, but the books themselves are printed well in advance. In fact book jackets can be printed as many as 6 months before the book goes out. We couldn't afford to do that and pull off this campaign, so we decided to throw all the old rules out the window." 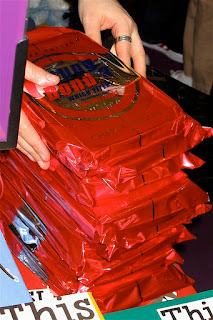 Penguin assembled a task force to oversee the entire operation to ensure that not a single book would appear in advance of publication. Confidentiality agreements had to be signed to keep the outsourced marketing materials and distribution under wraps. All delivery staff were sworn to secrecy, and the factory workers who would do the individual book wrapping had to sign non disclosure agreements.

Still, Renard says, "There were so many close calls."

To facilitate the printing process, three different covers were designed with the three titles, all featuring the same skull and cross bones image. At the moment the votes were tallied, Puffin would call up the printer and tell them which one to proceed with.

(Interestingly, German publisher Arena Verlag went ahead and selected their own title, GoldenBoy, and used cover art featuring poker chips, a motif that actually seemed to fit the book better than the UK's ultimate skull and crossbones cover.)

But not everyone was a fan of the poll idea. Under the headline "Poor Show Puffin", UK newspaper The Observer published a stuffy criticism, calling the idea "an unprecedented and quite shameful failure of imagination. [...] The whole exercise does make the Browser despair at the sort of creatives publishers employ these days."

Puffin's Rebecca McNally fired back in a letter to the editor: "The Browser somewhat missed the point of our nationwide vote to decide the title of Charlie Higson's third Young Bond book. This is an initiative designed to encourage young fans to interact very directly with their favorite book brand in ways that they are wholly accustomed to doing with brands outside the book world - text voting, e-flyers and on-line polls are very much part of our readers' lives, and a natural way for them to express their opinions, share ideas with friends and be active members of a community linked by shared interests. It also gives us as publishers of books for children a real opportunity to listen to their opinions." McNally concluded, "If the Browser really wants to be part of the decision, he could always vote."

The title reveal event was held at Waterstone’s Piccadilly on Wednesday, January 3, 2007, and was attended by the UK press and fans, including twelve year old Billy Jones from Manchester who earned the opportunity to be named in the book when he triumphed at the Young Bond Stunt Academy in January 2006 (a Blood Fever promotion). Incredibly, the entire first printing were sealed inside a protective Mylar bag to conceal the cover and winning title. Even Charlie Higson didn't know what the title would be, although he privately harbored a preference for The Deadlock Cipher. With cameras rolling and cameras ready, Higson pulled the book free – "It’s Double or Die!"


"I’m still slightly trying to work out why Double or Die is called Double or Die," Higson would later confess. "But if you ask a load of kids to give a title to a book that they’ve never read, what do you expect?"

Double or Die became the #1 Children's Bestseller for the week ending January 13, beating out Disney's juggernaut High School Musical Book. In-store promotions helped boost sales, with Waterstone’s exclusive "Decryption Competition" offering fans the chance to "Be Young Bond" for a day. This included a chartered flight in a helicopter over London, an original collector's copy of The Times newspaper from 1935, and dinner for four in a West End restaurant.

Double or Die delivered on Higson's promise to be different book than the first two, and Bond fans could not help but notice that he appeared to be echoing Ian Fleming's original James Bond novels, with Double or Die sharing characteristics of Fleming's own third book, Moonraker. "I’m not slavishly thinking 'Right, I’ve got to this in the next one and this in the next one'", Higson would later explain. "But it’s quite fun to go through that same process that he went through when he was reacting to readers' comments and what people like or disliked in the books."

With its London locations -- including Highgate Cemetery, the Royal College of Surgeons, and an illegal casino and prizefight den called "Paradice" (which would receive a mention in Sebastian Faulks' 2008 centenary Bond novel Devil May Care) -- Double or Die is the Young Bond novel that showcases its period setting the best. Higson peppers the book with delightful slang and idioms of the period. Long forgotten brand names are resurrected like product placement circa 1933. The book also doesn’t skimp on the gore, especially during the exciting climax on the London Docklands and inside an abandon pneumatic railway. The fact that the henchmen, Wolfgang, comes away from each encounter with young James missing another body part is grisly good Bondian fun.

But the biggest surprise in Double or Die comes at the very end when we get a postscript featuring the adult James Bond driving his Bentley and reflecting on his earliest encounter with code-breaking and computers.

"Well, I have to tell you I’m of two minds as to whether or not it was a good idea," Higson would say after publication. "I think it was quite fun to do. Unfortunately, some of the kids reading it think 'Oh, so he’s not going to be a kid anymore in the books. He's grown up now is he?' But as soon as they see the next one they’ll know that’s not true."


It turns out the "next one" would come sooner than anyone expected. Released as a promotional tie-in with Double or Die was the now collectible The Young Bond Rough Guide to London. The clever guidebook tie-in featured locations from the book along with modern London tourist destinations. But it was an advert on page 63 that rang the dinner bell for Young Bond fans. It announced that the fourth Young Bond novel would be released in just eight months! 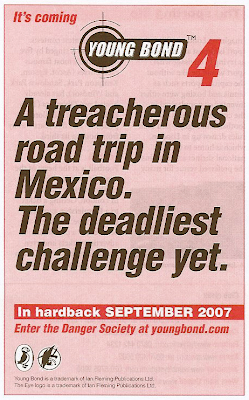