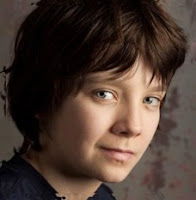 Asa Butterfield, the young star from Martin Scorsese's HUGO, was recently asked what his perfect role would be, and he reportedly replied: "Young Bond! Or some sort of sci-fi movie."

Now, the media took this to mean that he would like to play James Bond 007 in the future, but that isn't what he said. Sounds to me like he was referring specifically to Charlie Higson's Young Bond series. Heck, at his age, I expect he's had more experience with the Young Bond novels than the James Bond films.

I'm all for it! He's a great young actor and looks the part. Goodbye Daniel Craig. Let the Butterfield era begin!
Posted by John Cox at 1:10 PM