A naval jacket worn by James Bond creator Ian Fleming during World War II will be auctioned at Bonhams in London on November 22, 2011. Here is the full description from the Bonhams auction website. 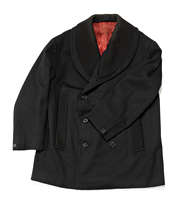 Lot No: 461
FLEMING (IAN)
Naval jacket worn by Fleming during the Dieppe Raid of 1942, whilst he was serving in the Naval Intelligence Division, a double-breasted navy blue jacket with deep red lining, eight buttons, stretched fabric collar and pocket trims; together with the accreditation card of John F.C. Bryce, as a foreign correspondent on the North American Newspaper Alliance, SIGNED BY FLEMING in his capacity as European Vice-President (2)

Footnote:
COMMANDER FLEMING'S NAVAL JACKET. At the outbreak of war Ian Fleming joined the Naval Intelligence Division, where he was "quickly promoted from lieutenant to commander. He liaised on behalf of the director of naval intelligence with the other secret services. One of few people given access to Ultra intelligence, he was responsible for the navy's input into anti-German black propaganda" (ODNB). Primarily based at the Admiralty's Room 39, Fleming accompanied the allied troops as an observer on the "Dieppe Raid", an assault on the German held port carried out on 19 August, 1942.

Provenance: Gifted by Ian Fleming to Ivar Bryce, a friend since his school days at Eton. Fleming dedicated Diamonds Are Forever to him and borrowed his middle name (Felix) for James Bond's best friend, CIA agent Felix Leiter. The dust-jacket of Diamonds featured an illustration of a diamond known as "Afghanistan" which belonged to Ivar's third wife Jo Bryce, and many of the local names in the book are based on Bryce's farm in Vermont where Fleming was a regular visitor; Bryce's niece Janet married David Mountbatten, third Marquess of Milford Haven, and the jacket is being sold by his great nephew, Lord Ivar Mountbatten. 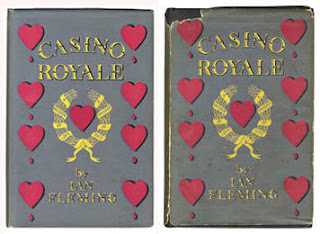