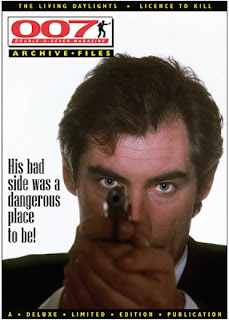 Graham Rye has just released the latest issue of his OO7 Magazine Archive Files, this one devoted to Timothy Dalton and his two Bond films, The Living Daylights (1987) and Licence To Kill (1989).

As most Bond fans know, Dalton took inspiration for his portrayal of 007 from the Fleming Bond books, more so than any Bond actor before or after. He was touted at the time as "The Most Dangerous Bond...Ever", and his uniquely hard-edged performance and films were a bold departure from the Moore era and well ahead of their time. Maybe a little too far ahead, as certainly Licence To Kill is a film that is more appreciated today than when it was released in 1989.

Graham and OO7 always championed Dalton and his films, so this looks like one to get. Certainly fans of the literary Bond will want this one on their shelfs, as it's nice to think of Timothy Dalton as "The Book Bond."

UPDATE: Wow! What a joy this issue is. Not only are the photos great, but the articles themselves are OUTSTANDING. The entire mag is written by Luke Williams who is obviously a giant Dalton fan. I love that he makes the case that Licence To Kill is actually "the best Bond movie ever" and, you know, he might have a point! But I especially love his article about Eon's battle with the British censor to get a 15 rating for Licence To Kill. This is all new information to me, thoroughly researched and brilliantly written. This might be one of the best articles ever produced for OO7 Magazine, and is the kind of true insider info that can only be found in an unofficial publication. Bravo, bravo, bravo. I also wasn't aware of the tensions between John Barry and a-ha. I learned a lot from this mag, and that's saying something.

I just wish Luke wouldn't make so many of his points by bashing Roger Moore. Every page of his The Living Daylights overview contains a swipe at Roger and his films. It's just really hard for a Roger fan like me to read. But I guess hating on Roger, and especially Moonraker, is also in the great tradition of OO7 Magazine, so... :)