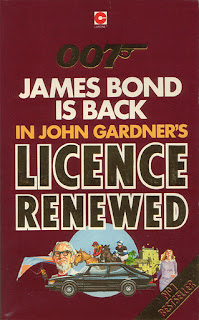 Here's a look at the original cover art for the 1982 UK paperback edition of John Gardner's Licence Renewed (from my own collection). This cover was recalled and replaced with another featuring one important change. Can you spot what the problem was with the original?

This original cover featured the 007 logo with the gun stock coming out of the 7. This is the trademarked movie Bond logo and it was deemed a major no-no to use this logo on a book that wasn't a novelization or film tie-in (despite the fact that it was used on the UK hardcover edition of John Pearson's James Bond The Authorized Biography of 007). A second edition of the Licence Renewed paperback was quickly issued with the gun stock snipped away. (Click here to see that replacement cover.)

I've always been curious to know how many of these "recalled" covers made it to market. When I first started collecting, I saw a proof of this cover in a private collection and believed it never made it to market. But then I turned up this copy in an Amsterdam bookstore in 1990. Was the stock sold off outside Britain maybe?

The logo issue was made moot in 2002 when IFP came up with their own unique literary 007 brand logo (left). This logo has graced the Ian Fleming reprints, the latest continuation novels by Faulks and Deaver, and most recently has been added to the cover art of the John Gardner reprints, including good old Licence Renewed.

Recently a copy of the recalled Licence Renewed paperback listed on eBay with the ambitious starting bid price of $49.99. It didn't sell.
Posted by John Cox at 2:50 PM