Orion releases ROLE OF HONOR and NOBODY LIVES FOREVER 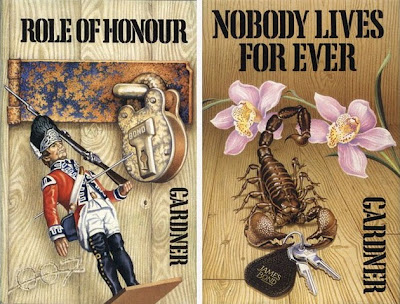 Orion Books have released the next two hardcover reprints of the classic John Gardner James Bond title, Role of Honor (first published in 1984) and Nobody Lives Forever (1986). The books each feature their beautiful original cover art (above).

Today also sees the release of the License Renewed audiobook.

Simon Gardner says, "My father, John Edmund Gardner, was extremely proud to have been asked to take on the role of Bond continuation novelist, and if he were alive today he would be overjoyed to see his Bond novels back in print for a new generation of fans to enjoy."

Orion will release a Box Set of all five hardcover reprints in November, and then ALL the John Gardner James Bond novels in paperback with all-new cover art throughout 2012 and 2013. For the full release timeline, visit our special Gardner Renewed page.