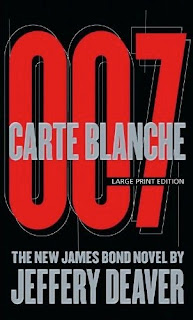 What I like about collecting large print editions is they sometimes sport wildly different cover art. Many of the John Gardner books were released in large print with very interesting cover designs (check out this edition of Nobody Lives Forever).

However, it appears from the photo on the Thorndike Press website that Carte Blanche uses the U.S. cover art with only a blurb tagging it as a "Large Print Edition." The large print edition of Devil May Care also used the standard U.S. art, so maybe the days of variant large print covers are over. *Sigh.*

The large print edition of Carte Blanche by Jeffery Deaver can be purchased at Amazon.com