“But James, you never told me. You mean your real biography? Isn’t that just what I always said that they should do? I mean those books of Ian’s were ridiculous. I never will be able to forgive him for the way he described me in that dreadful book of his.”
- Honeychild Rider

An “authorized biography” you ask? Authorized by whom? James Bond? Incredibly, yes!

(which professed to reveal the “truth” about Sherlock Holmes’ cocaine addiction) and Clifford Irving’s bogus Howard Hughes biography (there are some amusing similarities) that inspired this most unusual approach to Bond. Or if you’d rather believe the premise of the book, it is the true story of the real James Bond, secret agent and colleague of Ian Fleming, who gave a one-time interview to John Pearson while on leave in Bermuda in 1973. Pearson’s straight-faced presentation of how he came to meet the real 007 is the first highlight of many in this excellent and very worthy James Bond novel. I mean biography. I mean…well, just read on.

According to Pearson, after he finished his biography of Fleming, he received a strange letter from an elderly woman — an acquaintance of Fleming’s from Switzerland — telling him that James Bond is, in fact, a real person. As evidence she includes a photograph of Fleming with an intense-looking, athletic young man who she claims is 007 himself. Unfortunately, the woman dies before Pearson can interview her. Intrigued, Pearson does some research and discovers the name of James Bond on the Eton registry and in the ranks of the Royal Navy. Could the letter be right? Confirmation of sorts then comes from a shadowy government official, who warns Pearson to stop his investigation immediately. When the author doesn’t, another branch of the British government requests an audience — the British Secret Service!

Behind the closed doors of Universal Exports, all is revealed to the nervous author. James Bond 007 is, indeed, a real person who is currently in Bermuda on permanent sick leave. Instead of continuing the cover-up (which is becoming increasing difficult with 007′s growing “fame”), SIS figures it will reveal the whole truth in an “authorized biography.” Just as Bond is handed his passport to exotic adventure in the “grey building overlooking Regents Park,” so is author Pearson dispatched on this most delicate mission — interview James Bond and write his life story.

Pearson’s first meeting with 007 in a Bermuda hotel room is riveting:


“So this was Bond, this figure in the shadows. Until this moment I had taken it for granted that I knew him, as one does with any familiar character in what one thought was fiction. I had been picturing him as some sort of superman. The reality was different. There was something guarded and withdrawn about him. I felt that I was seeing an intriguing, unfamiliar face half-hidden by an image I could not forget.

It was a strong face, certainly – the eyes pale-grey and very cold, the mouth wide and hard; he didn’t smile. In some was I was reminded of Fleming’s own description of the man. The famous scar ran down the left cheek like a fault in the terrain between the jaw-line and the corner of the eye. The dark hair, grey streaked now, still fell in the authentic comma over the forehead. But there was something the descriptions of James Bond had not prepared me for – the air of tension which surrounded him. He had the look of someone who had suffered and who was wary of the pain’s return. Even Sir William seemed to be treating him with care as he introduced us. We shook hands.”

What follows is a terrific narrative that intercuts between Pearson’s adventures interviewing the sometimes uncooperative James Bond in Bermuda (in which Bond’s mysterious female companion is revealed to be none other than Honeychild Rider) and Pearson’s own retelling of Bond’s life story. Many of the events Pearson chronicles in this 317-page book read like James Bond short stories — and good ones at that! We get tales of Bond’s youth, his early missions, and even his wartime adventures, something fans have been clamoring for. Some of the stories have a bite that rivals Fleming. Bond’s mission to Stockholm to kill a former colleague is quite shocking, both in the events and the clean, clipped economy of the writing. Having mined movie ideas from many of the continuation novels by other authors, Eon Productions might be well advised to get their hands on Pearson. A villain who keeps his lair in an abandon zoo in Budapest? Not bad.

We also get looks at Bond’s failings and the periods between missions: James Bond forced to consider taking a job as a Harrods department store detective during a period of desperate unemployment; James Bond the social dropout living off his looks and wealthy women in island resort communities (Pearson reveals the events of The Hildebrand Rarity took place during one of Bond’s beachcomber periods). One of the strongest moments in the book is when Bond, during a period of suspension because of scandal, takes a seat at a Blades gambling table, not to best a villain or win over a woman, but in a last desperate attempt to make a living. All of Bond’s nerve and skills fail him. It’s as if the universe itself rejects a James Bond who is not 007.

Character-wise, Pearson presents a James Bond shaped by tragedy, starting with the death of his parents in the oft-mentioned climbing accident (the surprising details revealed here) and continuing on with several chapter-ending shockers. Pearson gets to the roots of Bond’s darkness, revealing a man who is subtly turned into a hired killer by a series of dubious mentors, ending with M. The book even explains how Bond got his famous scar (I won’t spoil it, but suffice it to say, James Bond’s face scar is a visible representation of a permanent scar within).

M himself gets a revisionist treatment in this book which may rub some Bond fans the wrong way. The chapter “The Truth About M” gets a bit bizarre and should maybe have been cut, but perhaps it worked in the 1970s as political commentary on the vices and corruptibility of aging authority figures. Ian Fleming is also a character in the story, a strange mirror image that Bond both admires and despises. It is Fleming who sends Commander Bond out on his first wartime mission (revealed to be a quite ill-advised mission at that), and it is Fleming who suggests the idea of the James Bond novels.

The premise of the book is strained a bit in the last third (abruptly sectioned off with its own heading titled “The Man and the Myth”) in which Bond recalls how the famous novels were a plot concocted by Fleming — and endorsed by M — to convince Bond’s enemies in SMERSH that 007 was a work of fiction. But wouldn’t the recounting of real events — such as the encounter at the Royale-les-Eaux — negate this? Also, the sudden appearance of the more fantastical characters of the Fleming novels don’t seem to belong in the same universe as the more realistic Pearson adventures.

Still, the “conspiracy” approach to the novels origins puts an interesting spin on things, and it’s amusing how Pearson explains that Moonraker was a pure work of fiction, concocted by Fleming and Bond to further confuse and frustrate the Russians. Also clever is how Pearson reveals that the reason James Bond is specifically targeted in From Russia With Love is to “out” the fictional character to the world. Ultimately, the Russians give up. Outing James Bond would only confirm their own many failings, so on the issue of 007, the Russians and the British reach a détente. The real James Bond must remain top secret.

It’s a delightful game Pearson gets to play in this book — using fiction, posing as nonfiction, to explain how famous works of fiction where, in fact, nonfiction. (Did you get all that?) The entire book is an exercise in misinformation, a twisting-and-turning spy experience for the reader. But maybe that’s why this book has been lost to time. Exactly WHAT this book is is a bit confusing for the casual reader. Again, it reminds one of The Seven Per Cent Solution, but that novel had the benefit of the tagline “The story is true. Only the facts have been made up.”

The book ends before Bond can recall the events of Colonel Sun (although the book is mentioned) as 007 is suddenly called back into active service. In the final chapter, Bill Tanner lays out the details of an Australian assignment involving Bond’s old nemesis Irma Bunt, setting up what would have been a terrific second Pearson novel. Unfortunately, this second novel never materialized; and Bond fans are left to wonder how James Bond handled “The Giant Rats of Crumper’s Dick.”

James Bond: The Authorized Biography of 007 was not published under the traditional Jonathan Cape banner, but through Sidgwick & Jackson. The U.K. dust jacket is notable in that it uses the cinematic 007 logo on its first edition (Danjaq would later object to the use of the 007 logo on the U.K. paperback edition of John Gardner’s License Renewed, forcing a redesign).

William Morrow & Co, New York, published the first U.S. edition. The dust jacket features a James Bond silhouette that looks remarkably like Pierce Brosnan (and this in 1973?). There were apparently two 1985 hardcover reprints, one by Granada in the UK and the other by HarperCollins in the U.S., but I’ve yet to see these editions.

When it came time for a paperback, James Bond: The Authorized Biography of 007 was published in the UK as a part of Pan Books terrific still life series. In the U.S., the paperback publisher was Pyramid Books. In 1986 Grafton reprinted the book in the UK and Grove Press reprinted it in the U.S. Both covers were less than inspired and not in sync with the current Bond series, only adding to this book’s oddball outsider statutes.


James Bond: The Authorized Biography of 007 was most recently reprinted in hardcover in 2007 and paperback

in 2008. These editions used the shortened UK title, James Bond The Authorized Biography, and have become fairly scarce in their own right. Now with the excitement of new adult continuation novels, as well as the release of the John Gardner classics, the book has once again slipped back under the radar. But just as author Pearson had to seek out the truth of his subject in 1973, so too must a Bond fan seek out Pearson’s discoveries in 2011.

It’s well worth the search. 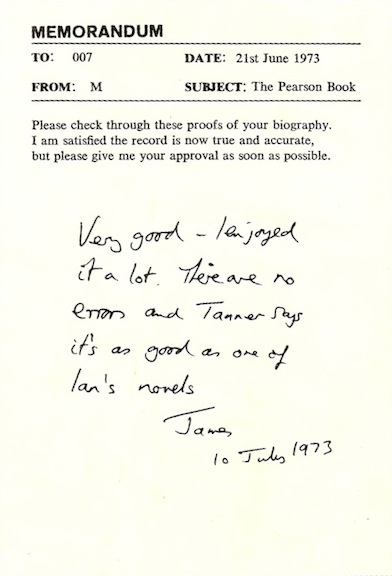