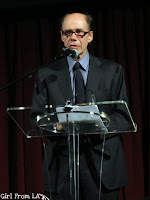 U.S. book tour. There was a good turnout for the 8pm event, which was hosted by the Rare Bird Lit.

Deaver spoke for about 45 minutes, reflecting on his process of writing, how it's a business to him, how he outlines and revises, and how he came to write Carte Blanche. In the audience were many L.A.-based Bond aficionados, including the eminent John Cork and Collin Stutz (co-author of The James Bond Encyclopedia

During the Q&A session, Deaver didn't give up any secrets of what IFP might have planned next for Bond (despite our best efforts to get him to do so). He said he's turning his attention of his next Kathryn Dance novel (set in...Fresno?) and has no set plans to return to Bond. However, he did feel he set-up some things in Carte Blanche that other authors could explore if they like (presumably Steel Cartridge).

I asked Deaver about the title, which he said was suggested by his editor. Unfortunately, he didn't reveal any rejected or working titles (a particular fascination for me).

Afterwards Deaver signed all the books and generously posed for photos with all the attendees, including yours truly. Inside my own copy of Carte Blanche he wrote, "It means a lot to me that you enjoyed it!" :)

All in all, it was another terrific L.A. Bond event, and it was great to see Jeffery Deaver in person and so many of my Bond friends. 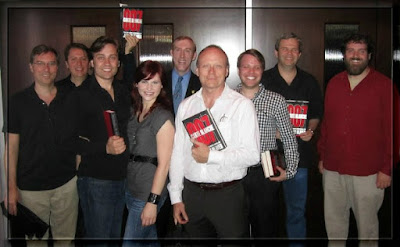 Photos by Athena Stamos, Girl From LA Photography
Posted by John Cox at 9:41 AM