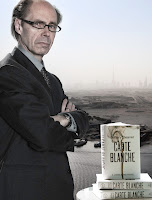 CommanderBond.net has revealed details of an exciting competition from Carte Blanche UK publisher, Hodder & Stoughton. The idea is to solve a series of cryptic clues that will be revealed on select websites and the new official 007 Carte Blanche Facebook page (launching tomorrow) to put yourself in with a chance of competing in the final secret mission, which will only be revealed towards the end of the month.

The first prize is a signed copy of Carte Blanche to read ahead of publication, and the opportunity to meet author Jeffery Deaver on 26th May 2011. The winner (with plus one) will also be invited to spend one night in a deluxe double room at the exclusive The Lanesborough, a 5* St Regis Hotel in London, on the night of 25th May 2011.

There are 10 runner up prizes which are one ticket each to the Times+ Meet The Author! launch day event, which will be held at 7:30pm on the 26th May at the Congress Centre, Great Russell Street, London.

For more details and for an advance look at the first clue, head on over to the CommanderBond.net forums, the largest James Bond fan community on the web.