BY ROYAL COMMAND paperback released in the U.S. 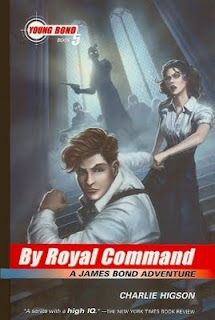 , is released today in paperback in the U.S. by Disney Books.

Cover art is the same artwork by Owen Richardson that was used on the hardcover last year, but with a quote from The New York Times Book Review added below Charlie’s name.

No extras or surprises inside, just another good quality paperback from Disney that fits in nicely with their other releases. In fact, the first three Young Bond titles, SilverFin, Blood Fever, and Double or Die have been re-released with new cover treatments that match these later paperbacks.

The By Royal Command U.S. paperback can be purchased at Amazon.com