The return of Charlie Higson 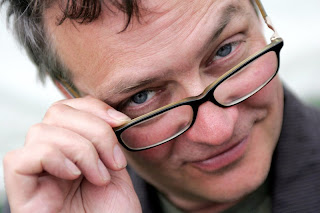 Looks like taking a break has put Charlie Higson back in the mood to talk about James Bond. Charlie recently gave a terrific interview to the blog ARRRG! in which he talks exclusively about 007. There's some really wonderful stuff here that I've never heard before. A sampling:

"It was understood from quite early on that I wasn’t going to try to ape Fleming’s style. I was going to tell the same type of story that he told, using the same types of character, the same structure and occasionally some of the same vocabulary. When you look closely at his books these things jump out at you. He loved, for instance, to use the word crouching to describe things like mountains, and for some reason he was obsessed with the colour violet, so, really for my own amusement, I used some of his vocab in my books. I knew, though, that I couldn’t copy Fleming’s style, and it is that style which in many ways gives the books their immense readability and their charm and character. Bond is fairly basic and blunt, there’s not a lot of depth to him, all the character of the books comes from Fleming’s narrative voice. “That smoky Fleet Street drawl” as it has been described, and so in some ways Bond takes on the character of Fleming. I wanted my books to be Charlie Higson books in the spirit of Fleming but not the style. It would have been too hard to maintain over five books, and might have alienated kids. I wanted my books to speak to a contemporary young reader and I wrote them in my normal style – stripped back, ‘hard-boiled’, unfussy – which I think works well for kids. That being said, they were James Bond books and I knew they had to have the all the adventure and the romance of James Bond, so, to get me in the mood, I played a lot of John Barry music when I was writing. It really helps with a nice action sequence."

Charlie also recently tackled the controversy over Hollywood's plans to reboot Agatha Christie's Miss Marple in the guise of...Jennifer Garner? Charlie gets a great joke off in the this one -- made all the more funny because it's absolutely true. Give that a listen at the BBC News website.

Charlie is currently finishing up the second draft of his new Enemy series book, The Fear (cover right). It's due for release in September and can be pre-ordered on Amazon.co.uk.

The paperback edition of his second book, The Dead, will be released in the UK next week. The U.S. edition

of The Dead will hit stores in hardcover on June 14 (same day as Carte Blanche).

Unfortunately, there doesn't appear to be any immediate plans for him to pen more Young Bond novels.
Posted by John Cox at 7:13 AM