Bond's Bentley rolls out for the press 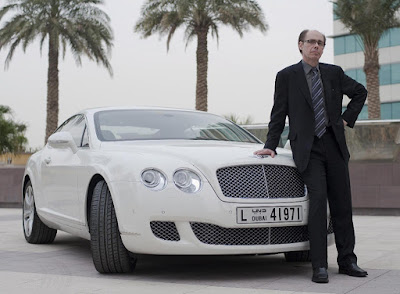 , there is a now an official press release and pics of the author in Dubai with 007's new ride. According to the release:

"Bond is back, and as ever he is sporting the best in luxury cars. In the pages of Carte Blanche, the new James Bond book by international best-selling author Jeffery Deaver, the fictional British spy has continued with his classic preference of luxury sports car by selecting the breathtaking new Bentley Continental GT as his transport of choice.

While James Bond’s new car may be better suited for a secret agent in understated tones, the author of the book admired a less inconspicuous model. Set in stunning white with a blood-red interior, the new Continental GT mixes svelte good looks with power, poise and exceptional prowess. The hand-stitched leather interior contains all the high-tech gadgetry Bond could ever need. And with the famed sound dampening that only lets through the captivating sound of the wonderful engine, the cabin provides a true Quantum of Solace for Fleming’s jet-setting gentleman spy."

Sounds good to me. Here are a few more shots.