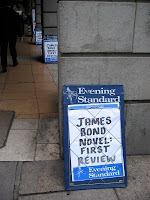 It was one year ago that Bondmania swept London as the first (adult) Bond novel in six years was released to mark the centenary of Ian Fleming's birth. "Centenary Week" saw London awash in billboards and store displays, newspaper extracts, and a spectacular launch event which saw model Tuuli Shipster and Royal Marines transport the first copies of Devil May Care via speedboat to a battleship on the Thames, and then onto Waterstone's Picidilly via a fleet of Bentleys. What a week it was for Bond fans!

Here are a few links to coverage of the week.

Centenary Week Photo Gallery
Posted by The Book Bond at 9:20 AM