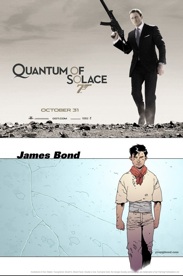 Here’s one for fun. The all-new teaser poster for the upcoming James Bond film, Quantum of Solace, has been released. It’s a terrific image from what promises to be an exciting film. But what I particularly like about this poster is how it matches, both in image and attitude, the latest Young Bond image from Kev Walker.

The similarity is coincidental, but it’s a nice coincidence that brings these two successful James Bond “reboots” together in a cool visual way.

Quantum of Solace will be released October 31st in the UK and November 7 in the U.S. The fifth Young Bond novel By Royal Command will be released September 4, 2008.
Posted by John Cox at 9:29 AM