Her Majesty the Bond Girl? 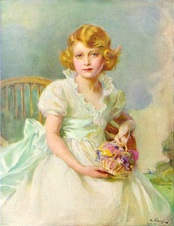 Is the Queen of England the new Bond Girl?

We’ve known for some time that the British Royal family plays a role in Charlie Higson’s fifth Young Bond adventure, By Royal Command. In a recent Q&A, Charlie revealed precisely which Royals those are and, yes, Elizabeth is one of them!

Says Charlie, “I don’t want to spoil it. What can I say? Bond meets princess Elizabeth… (based on an anecdote told me by my father in law, who met her in very similar circumstances). He also meets the Prince of Wales - later the Duke of Windsor (heir to the throne).”

The events of By Royal Command take place in 1934 when Elizabeth is only 8-years-old (the portrait above was painted in 1933), so it’s unlikely the future queen will be directly involved in the action.

But you never know. James Bond does have a way of bringing out the action hero in everybody.