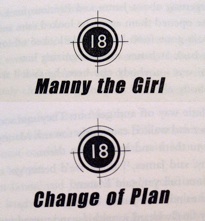 Here’s one for the collectors.

Trempo over at the always vigilant CBn Forums has discovered an error in the Hurricane Gold UK hardcover. It appears Chapter 17, Manny the Girl (so noted in the Table of Contents) is mis-numbered as Chapter 18 in the body of the book. The following chapter, Change of Plan, is also marked as Chapter 18.

Printing errors such as these can sometimes have an impact on the value of first editions, especially if the error was discovered and corrected before the first print run was complete. There are several minor errors in the Ian Fleming first editions that substantially effect value.

This isn’t the first Young Bond novel error of note. The first edition of SilverFin stated on it’s title page that the next Young Bond novel would be coming out in October 2005, while an advert for the same book in the back showed a January 2006 release. This was corrected in the 2nd edition. Booksellers on eBay and elsewhere note this error as an important identify “point” for a true SilverFin first.
Posted by John Cox at 9:38 AM