The mystery of THE KILLING ZONE

I first posted this in 2007, but as The Book Bond now has a larger readership, I thought this was worth a re-post for those who have never heard of this literary Bond curiosity. Enjoy. 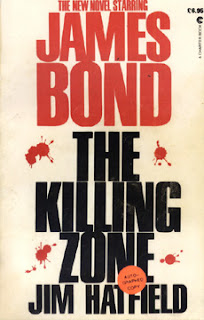 One of the more mysterious stories in the world of the literary James Bond is that of the little-known 007 novel The Killing Zone by Jim Hatfield. The 251 page novel tells the story of 007 going after a drug lord in Mexico after he murders Bond’s friend and colleague, Bill Tanner. It's a plotline strikingly similar to the film Licence To Kill (still four years away when The Killing Zone was "published"), and includes the surprise reappearance of Major Anya Amasova from The Spy Who Loved Me. It also includes the even more surprising death of James Bond in its final pages!

The Killing Zone appeared in 1985 -- the year official continuation novelist John Gardner had off -- and claims on its copyright page to be officially licensed by Glidrose Publications (now Ian Fleming Publications). But this book is far from official.

The Killing Zone was the creation of Jim Hatfield, a legitimate author of several books, most notably of the infamous George W. Bush biography, Fortunate Son, which claimed the former U.S. president was once arrested for cocaine possession. He was also a man who had his fair share of problems with the law.

The story (as uncovered by the now defunct 007Forever website) is that Hatfield told co-workers he had been named the new James Bond continuation author. In order to keep his ruse alive, he wrote and self-published The Killing Zone, which on close examination is a bizarre patchwork of original material mixed with plagiarized passages from the Bond novels by John Pearson and John Gardner and other spy novels.

Even the cover art is a patchwork forgery. Despite the claim on the back of the book that it was designed and hand lettered by David Gatti, the "James Bond" was lifted from the U.S. paperback edition of James Bond The Authorized Biography and the title design was taken from a novel of the same name by William Crawford Woods (I've yet to discover the source of the blood spots). 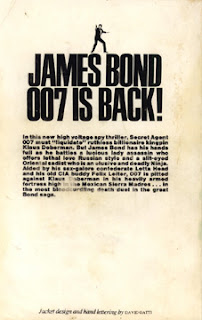 Despite all this, The Killing Zone is not entirely without Bondian merit. It features some clever action scenes, good use of Mexican locales (Puerto Vallarta, Acapulco, Sierra Madre), and a strong villain in Klaus Dobermann. The return of Triple X is fun in a fan fiction sort of way, but Hatfield does go a step too far with the name of his Bond Girl: Lotta Head.

Precisely how many copies of The Killing Zone were printed is not known. There have been rumors of large stashes tucked away, but like so much with Hatfield, the truth is elusive. Thus far, only two copies of The Killing Zone have ever surfaced, both signed by Hatfield to female co-workers. (I own one of these two copies, which I purchased from a mysterious seller, "A. Smith," on eBay in 2000.)

Plagued by problems with alcohol and facing arrest for credit card fraud, Jim Hatfield committed suicide in an Arkansas motel in 2001. Near the end, Hatfield believed he was under surveillance by the Bush administration, and there are those who suggest he was actually murdered by the minions of George W. Bush.

It all sounds like something out of a James Bond novel.
Posted by The Book Bond at 9:59 AM