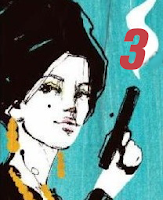 It appears the information floodgates are starting to open on the big 2008 Bond releases. Over the weekend we got the Hurricane Gold paperback cover art, the SilverFin Graphic Novel has just appeared on Amazon...and now we score the official plot teaser for Samantha Weinberg's concluding chapter in her Moneypenny Diaries trilogy, Final Fling.

(Warning: Contains spoilers for those who have not read the first two novels.)

FINAL FLING combines the excitement of a cold war spy thriller with the mystery of a contemporary detective story. In the 1964/65 volume of her private diaries, Jane Moneypenny reports her demotion from the position of M’s secretary as the British Secret Intelligence Service is hit by a series of defection scandals. Facing considerable personal danger, she combines forces with 007 in a resolve to smoke out the mole she is convinced is buried deep in the heart of the Office. But, when Bond is sacked and M is forced into retirement, Moneypenny finds herself on her own…

Forty-two years later, Miss Moneypenny’s niece and heir, Kate Westbrook, starts to suspect that her aunt’s death was no accident. She is sure the clues to what happened lie in the search for the mole. As she pieces them together, however, she realizes that there are significant forces who are determined to prevent her finding the truth.

From the glamour of 1960s Jamaica to the treacherous beaches of the Outer Hebrides, FINAL FLING reveals just how far people are prepared to go to defend – or betray – their beliefs, and relates the life and death, and surprising final love, of the world’s most famous fictional secretary.

Bond is sacked? M is forced into retirement? Sounds like Final Fling is going to be a substantial (and maybe controversial) contribution to the James Bond continuation canon.

Final Fling is due for release in May 2008 and can be pre-ordered now on Amazon.co.uk.
Posted by The Book Bond at 3:14 PM