Bond to drive a Bentley in Devil May Care 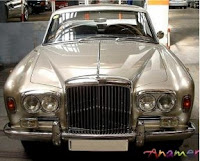 The Telegraph reports that James Bond will drive a Bentley in the new adult centenary Bond novel Devil May Care by Sebastian Faulks.

"Despite many of the films portraying him with an Aston Martin, Bond's first choice of car was a Bentley, so that is what he will be driving in my book," says Faulks.

"He also spends quite a lot of time abroad on his adventure, so in want of a hire car, which wouldn't really befit James, he will also have a driver at his disposal."

While Faulks revealed the color (battleship grey), he didn’t reveal the exact make of Bentley Bond would drive. James Rosenstein, Bentley's global director of external affairs, suggested it could be the 1967 T-series Bentley (pictured above), a popular model the year in which the novel is set.

"It is wonderful that somebody has decided to go back to the roots of the original book, to Ian Fleming's own tastes and to James Bond's passion for the cars," said Rosenstein.

Of course, Charlie Higson returned Bond to his automotive roots in his third Young Bond novel, Double or Die. In this book Bond acquires his classic Bentley 5.1 that sees him through Casino Royale.

The U.S. hardcover edition of Devil May Care is now available for pre-order on Amazon.com. The book will be released in May 2008 by Doubleday in the U.S. and Penguin in the UK.