A long lost appearance of YOUNG BOND at Eton 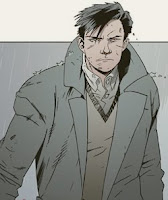 Our friend Tanner over at the excellent spy blog Double O Section has uncovered “a long lost appearance” of young James Bond at Eton. But he’s unlike the hero of the Charlie Higson novels. In fact, this “Young Bond” is a bully!

In the 1977 fiction biography of The Avengers hero John Steed (John Steed: An Authorized Biography by Tim Heald), we find this passage:

One factor which seems to have contributed to John's unhappiness at this time was the bullying which was an unfortunate feature of life in the school - or at least in those circles in which Steed moved. The main bully was a boy called Bond, later to achieve a certain notoriety in a career not totally unlike Steed's. Indeed their paths were to cross several times in adult life, seldom with profitable results. Although Bond was only two or so years older than Steed (a fact which will doubtless be disputed by Bond and his cronies) he was a great deal bigger. One of his fetishes was to make smaller boys stir his evening mug of cocoa for him, just as in later life he was to make a laughable affectation out of his insistence on dry martini cocktails being stirred rather than shaken. One day he demanded that Steed perform this service. Steed refused. Bond again insisted.

'Who the hell do you think you are?' enquired Steed, suggesting at the same time that he should pick on someone his own size.

'Well, Bond,' said Steed evenly,'If you'd like to present yourself behind the Fives Courts by Jordan in half an hour's time I'll show you in the only language you apparently understand, precisely why I have no intention of stirring your rotten cocoa.'


Perhaps Charlie Higson can work in an appearance of John Steed in Young Bond 5 to return the favor?

Head on over to Double O Section to read more about this rare John Steed biography, and for a wealth of information on all things SPY.
Posted by John Cox at 4:46 PM