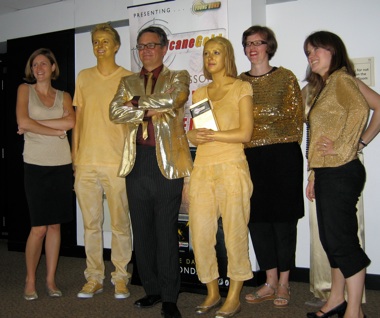 Charlie Higson’s fourth Young Bond novel Hurricane Gold was officially released today with an all-gold launch party at Waterstone’s Piccadilly, and once again our intrepid UK corespondent Neal Romanek was dispatched to bring back details and pics from the big event. 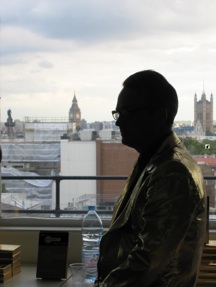 Things kicked off behind closed doors with a six o’clock photocall for press. Here Charlie posed with the golden people who had been wandering the streets of London all day with copies of the book in hand, as well as members of the Young Bond team. Intriguingly, they posed beside a poster that featured what appears to be a hint of traditional “creature art” for the novel (maybe something we’ll see on the paperback next year?).

Doors were opened at 6:30 and the event began with approximately 100 Young Bond fans in attendance. Per the invitation, many came dressed in gold clothes, cowboy hats, and, oddly enough, Chinese caps. Fans were greeted by the golden people while Charlie’s beloved Mariachi music played, and hors d'oeuvres of tortilla chips and golden cupcakes were offered up (Neal spoke very highly of the cupcakes). There was also a roulette wheel and no shortage of golden balloons (but unlike the Double or Die party, they did not feature the Young Bond logo). 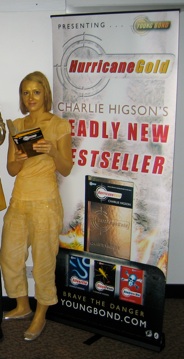 At approximately seven o’clock Charlie made his entrance dressed in a gold jacket and tie. He started off by giving his usual amusing introductory speech. He then read an excerpt from Hurricane Gold in which Young Bond attempts to negotiate the flooding streets of a Mexican village behind the wheel of a super-charged 1933 Duesenberg SJ, truly one of the novel’s most exciting sequences!

The floor was then opened to questions and these young fans came prepared. During the Q&A Charlie hinted that Amy Goodenough might be back in Book 5. He also pretty much confirmed that Babushka from Double or Die will return in the final Young Bond adventure (something that was also alluded to in The Young Bond Rough Guide to London -- which was included in the Young Bond swag handed out at the event).

Following the Q&A, Charlie took a seat in the next room for the signing while doors were opened to all the un-ticketed attendees who had been queuing outside. This time fans were restricted to only two copies of the book. Things moved along briskly with Charlie signing the books in gold pen (of course) and included in my own personalize copy the helpful suggestion that I “should get out more.” :p

All in all, it seemed to be another terrific and memorable Young Bond event for all who were lucky enough to attend. 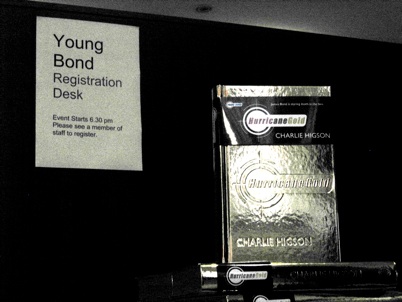