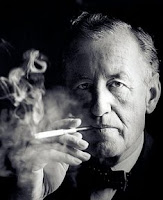 The Times have announced one of the major Ian Fleming Centenary celebration events for next year.

For Your Eyes Only: Ian Fleming and James Bond, will run from April 25, 2008 to March 1, 2009 at the Imperial War Museum, and will be the first comprehensive exhibition exploring the Bond phenomenon and the life of his creator.

Rare material on display will include Fleming’s research notes for From Russia with Love, a map of the Mercury News Network, established by Fleming in the 1950s to collect information and intelligence from Sunday Times foreign correspondents; notes for the scandalous Thrilling Cities series in which Fleming explored the casinos and brothels of the world’s most glamorous metropolises; annotated Bond manuscripts; the Colt Python .357 Magnum revolver presented to Fleming by the Colt company; and the manuscript for Chitty Chitty Bang Bang, Fleming’s other enduring classic.

The organisers also hope to track down the golden typewriter that Fleming used and to secure a letter to the author written by a Major Boothroyd, advising him on what handguns he thought would be most appropriate for Bond.

The exhibit will show how the Bond plots, locations and villains were rooted in Fleming’s experiences during the Second World War and as a well-travelled reporter. It will examine to what extent the books and films reflect the reality of the Cold War and life in postwar Britain and how far they were a product of Fleming’s prodigious imagination.

Ben Macintyre is writing the book to accompany the exhibition, For Your Eyes Only: Ian Fleming and James Bond, due to be published by Bloomsbury in April.
Posted by The Book Bond at 12:54 PM