Daring to be (not so Young) BOND 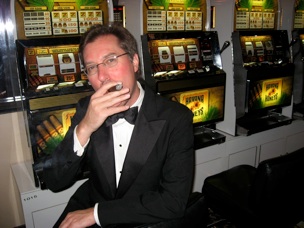 This weekend Athena and I decided to “be the man instead of the fan” at the first Dare to Be Bond event in Las Vegas. The three day gathering of Bond fanatics from across the country was hosted by Charles Axworthy (aka “Bryce” on the CBn Forums), and what an event it turned out to be!

We missed the arrival night festivities on Thursday, but when we hit Vegas early Friday morning, the word from the excited attendees was that the required “medical check-in” consisted of a full body massage by a professional masseuse. This had followed a limo ride from the Vegas airport. Welcome to the world of James Bond. 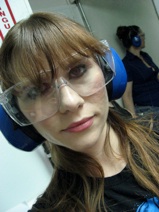 Athena and I did land in time for Friday’s first event of the day – water re-certification, i.e., pool games at a private pool at the Tropicana (Bond’s hotel of choice in Diamonds Are Forever). There was also a full hosted bar and a spectacular lunch spread for all to enjoy.

Filled with booze and food, it was off to the gun range -- wait, we get loaded then go to a gun range? That’s okay. This is Vegas, we are Bond, and we sobered up pretty quickly at The Gun Store where we got to fire an assortment of handguns (Browning HP, S&W Model 36 .38 snub nose, Ruger P9, Walther PPK), as well as two machine guns (Uzi 9mm, H&K MP5 A3). Yes, we shot machine guns! As I fired off my first burst into the target, my instructor nodded and said only one word: “Meaningful!” 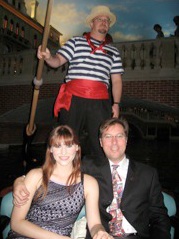 Back to the hotel to change into dinner wear (my Young Bond pin was a part of my suit attire that night), we climbed into a Hummer limousine and were whisked down the Las Vegas strip to The Venetian, where private gondolas awaited. Theme here; From Russia With Love, Moonraker, Casino Royale, of course! Our godlier not only treated us to a few songs, but also a story of how he had once had Sean Connery in his boat.

Dinner at Canaletto followed. We had a private room on the second floor overlooking San Marco square (or what I call “Moonraker square”). Martinis followed by fantastic food and passionate Bond talk filled the evening. I was there to preach the gospel of Young Bond, but I quickly discovered it wasn't necessary. If you’re hardcore enough to attend an event like this, then you’re already hip to Higson and a convert, and this was certainly true of this crew (my argument that Moonraker -- without its silly moments -- is among the best films of the series, wasn’t as universally embraced). 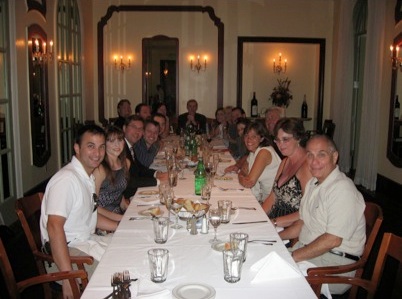 The evening ended at the Las Vegas Hilton (aka, The Whyte House from Diamonds Are Forever) where we shared a “Warp Core Breach.” Hey, if you’re going to have “one too many” this is a heck of a one to have. We then bumbled our way back to the hotel in a fog of booze and conversation about…who knows what (our poor cabbie). 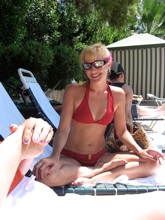 Day two started with a free morning to nurse hangovers and collect ourselves (deft planning here by Bryce). I was able to get online where I saw CBn had launched it’s new main page design. Very slick.

At high noon we met by the Tropicana pool for a little lunch and Daiquiris and a rundown of what to expect that day. We then departed for what was for many the high point of the weekend -- skydiving…indoor skydiving.

It’s called Flyaway Indoor Skydiving and it’s one of only a few such facilities in the country. Frankly, it started off a little scary when during our preparatory briefing we were asked to sign waivers and warned this activity can lead to broken bones and even death.

We suited up in jumpsuits, goggles, and helmets…the whole time we could hear something in the next room that sounded big and mean, like an aircraft engine. Turns out, that’s exactly what it was! Okay, I could describe what happened next, but why not show it: 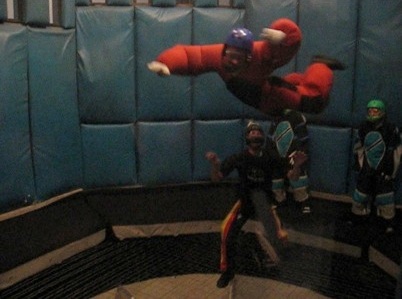 We came out our skydiving experience fatality free and buzzing with excitement. It was then back to the hotel for a quick rest (amazing how tiring this was), then it was time for formal wear.

Dressed in tuxedos and Bond Girl gowns, the crew assembled in the hospitality suite on the 20th floor of the Tropicana (which had a view to kill, as you can imagine). There we took Bondian-style photos, then it was off to the Savanna Steakhouse for another first class meal. Crab legs, prime rib, lobster, fine wine, champagne shots in a chocolate cup... Oh, and the table was decorated in uncut diamonds sprinkled across black velvet. Pure Bond. Pure Bryce! 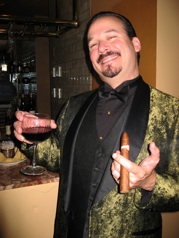 After dinner we got a terrific lesson in the fine art of cigars by Dr. Jeffrey Paskil, a true epicure. Genuine Cubans were enjoyed by all, and the evening ended in another fog of fine food, friends, cigar smoke, and yet more Bond talk back in the suite.

Many of the group departed in the early hours on Sunday, but those who remained gathered for a farewell Champagne brunch at the Tropicana buffet (you can’t go to Vegas and not do a buffet!). There we said our final goodbyes over mimosas and mounds of food.

On our way out of town, Athena and I decided to detour back to The Whyte House…er, I mean, The Hilton, and check out The Star Trek Experience. No, it’s not Bond, but it was first rate! We then hit the long desert road for home.

All in all, it was an incredible three days of being Bond...James Bond! 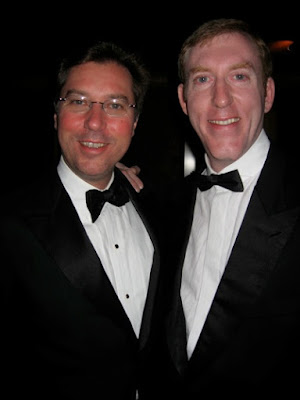 Email ThisBlogThis!Share to TwitterShare to FacebookShare to Pinterest
Tags: Events