U.S. BLOOD FEVER to be unedited 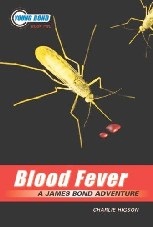 Aside from some UK to U.S. grammatical changes, the full text of the U.S. edition, which will be released by Miramax/Hyperion on June 1, 2006, will match the UK edition released by Puffin Books earlier this year.

Fans complained that the U.S. hardcover edition of SilverFin was somewhat prudishly edited by Disney-owned publisher Miramax/Hyperion. Some scenes of violence were trimmed, as was a mention of smoking and even a reference to Wilder Lawless’ “powerful thighs.” Most U.S. fans opted to purchase the Puffin edition over the Hyperion book for this reason.

There was a fear that Blood Fever -- a far more violent book -- might be edited down to just its chapter titles and punctuation marks. But it looks like the good folks at Miramax/Hyperion are giving the people what they want, and both sides of the Atlantic will get to enjoy the novel just as author Higson wrote it.