THE WORLD IS NOT ENOUGH large print edition released 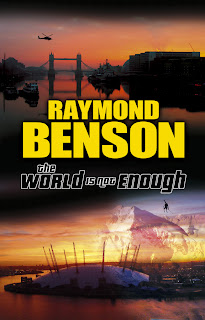 Raymond Benson’s novelization of The World Is Not Enough, originally published in 1999, has just been released in a large print edition by Ulverscroft Large Print and can be purchased at Amazon.co.uk.

What makes this particular book interesting (and collectible) is that it uses cover art radically different from what appeared on the original 1999 U.S. and UK releases. While many large print editions opt for variant covers, novelisations typically stick with the movie poster art. But not this time.

This is the second large print edition of a Benson Bond film novelisation, the first being Die Another Day. Benson’s original Bond books High Time To Kill, DoubleShot, and Never Dream of Dying have also been published in large print. There were plans for a large print edition of The Man With The Red Tattoo, but the book has yet to materialize.

Large print editions can be highly collectible as they are typically published in small quantities with most going to libraries. All the Fleming novels and most of the James Bond novels by John Gardner have appeared in large print editions.
Posted by John Cox at 7:25 AM

Email ThisBlogThis!Share to TwitterShare to FacebookShare to Pinterest
Tags: Films, Large print, Novelizations, Raymond Benson, The World Is Not Enough