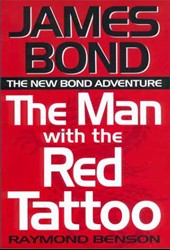 Having shown he can work outside the rules of convention in his brilliant Union Trilogy, Raymond Benson returns to the formula in his sixth book, The Man With The Red Tattoo

, and delivers his most traditional Bond adventure since The Facts of Death. But this is a Benson with a much surer grasp on his skills than he had in his sophomore outing, and like the rocket ride it is, The Man With The Red Tattoo instantly achieves a pitch perfect mix of classic plot, action, and depth of character that recalls Fleming at his best. (In pace and tone, I’m reminded of Dr. No, coincidentally, Fleming’s sixth book as well). While I would still classify Never Dream of Dying as Benson’s best “novel,” The Man With The Red Tattoo is Benson’s most perfectly realized Bond “thriller” to date with a strong sense of location and the best caper of them all.

Some may fault Benson for following convention a little too closely this time out, but I don’t. In an era of contrived attempts to “personalize” Bond’s missions or “peel back the layers” of Bond’s psyche, it’s refreshing to have a straightforward Bond-on-a-dangerous-assignment-in-an-exotic-locale adventure. This time, Mr. Bond, it isn’t personal. Halleluiah! Even the return of the Walther PPK seems to be Benson’s way of saying, “Let’s just use what has always worked and enough with the self-conscious ‘updating’ of the character.” In this way, I think Red Tattoo is well ahead of the curve. (Of course, this has been true of the Benson books and is one of the reasons I look forward to the books as much as I do the films.)

But this doesn’t mean Red Tattoo is lacking in character depth. Just the opposite is true. Japan holds dark memories for Bond, and that aspect is not ignored. Whereas John Gardner might have given a passing reference to Bond’s legendary ordeal in You Only Live Twice (if even that), Benson uses the “ghosts” of Bond’s past as a full-fledged complication. Fans will not be disappointed in how Benson weaves elements of the Fleming masterpiece into this current book. The end of chapter 17 will certainly move Bond fans.

Benson always referred to this book as “The Japan Book,” and now I see why. Japan is very much a character in this novel–in many ways, the main character–both ally and nemesis to 007. After so long, it’s thrilling to have a Bond story take place in one locale instead of globetrotting from one scenic set piece to the next. Anchoring Bond in one locale gives Benson a chance to flesh out the country with wonderful cultural details. It’s Benson’s attention to these details and his ability to weave them into the plot in highly entertaining ways that make his books the best of all the post-Fleming adventures. It’s where Red Tattoo excels.

As far as flesh and blood characters go, Bond girl Reiko Tamura is highly appealing in her role as Bond’s agent partner (definitely a traditional role here). Her performance in the spectacular Seikan Tunnel sequence is particularly memorable. Wayward wild child Mayumi is less appealing, especially in contrast to the more mature Reiko. Goro Yoshida (the man with the red tattoo) is a Blofeld-type villain who remains mostly off screen until the end. Yoshida’s henchman, “Kappa,” is Benson’s most delightfully bizarre killer since Margarita Piel in Doubleshot. Bond’s ally, Tiger Tanaka, makes a wonderful addition from the past although one does note the absence of the hyper-masculinity and sexism that so codified their friendship in the Fleming book. And–and this is as close to a *SPOILER* as I will come–fans who worry about another Never Dream of Dying type “twist” to the character… need not worry.

Fans of action will not be disappointed as gunfights and fistfights abound in Red Tattoo. It’s probably Benson’s most violent book to date–the body count is quite high–but this seems to be in keeping with the Asian action movie milieu the book frequently evokes. Surprisingly, Benson has retreated to an almost Gardneresque modesty in his sex scenes, possibly due to the unfair drubbing he’s taken by the more puritanical factions of fandom for trying to return a measure of kinky sexuality to the books. The methodology of the villain’s master plan is ingenious and is the best conceived caper we’ve had, book or film, in quite some time. The use of Yoshida’s deadly “assassins” throughout the book is pure Bond. And speaking of films, have I mentioned that Red Tattoo would make an amazing Bond movie? Well, it would.

My one complaint would be that the Major Boothroyd scene seems a bit labored. But “Q,” a creation of the films, has never been a comfortable fit in the world of the literary Bond, and one gets the feeling that Benson is forced to include him. In the same vein but on a more positive note, having thoroughly explored Bond’s relationship with “M” and her cohorts in the past few books, Benson wisely blasts past these obligatory scenes and gets Bond right into action. Again, Benson is bang on target with his choices here. I for one don’t need another dramatic conflict between Bond and “M” for quite a while.

Publisher Hodder & Stoughton did not exactly burden themselves in coming up with an overly creative dust jacket design this time, but it will do. As always, the U.S. edition published by Putnam is better bound and printed on better paper with superior typeset.

For the seasoned Bond fan, The Man With The Red Tattoo

is the perfect book at the perfect time. For those who have yet to read a Bond book and are looking for a classic cocktail of Bondian action, suspense, and exotic locales, you would be well advised to start right here.
Posted by John Cox at 7:11 AM

Email ThisBlogThis!Share to TwitterShare to FacebookShare to Pinterest
Tags: BOOK BOND REVIEW, Raymond Benson, The Man With The Red Tattoo